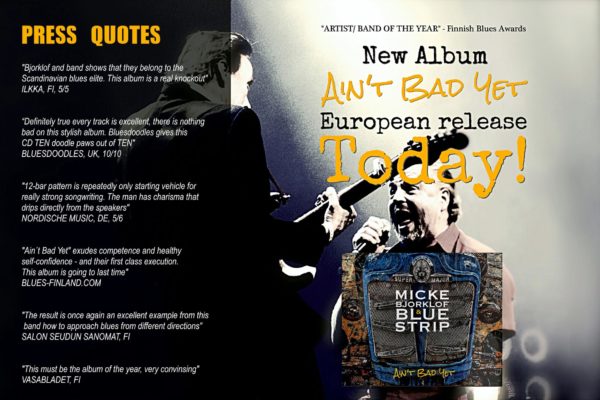 We are very proud to announce that Micke Bjorklof & Blue Strip is the winner of “Best Band Of The Year” at Finnish Blues Awards 2015. This is really awesome and we are extremely happy about this honor. Thank you all for your support!

New album, titled “Ain´t Bad Yet” is produced by  John Porter, legendary for his productions of Buddy Guy, B.B King, Taj Mahal, Keb Mo, Santana and no less than 10 Grammy winning albums. The album was recorded at the legendary Rockfield Studios in UK. In 1975 it was the primary studios used by Queen for the recording of the greatest pop record of all times ‘Bohemian Rhapsody’.  Album cover is now launched.  Scandinavian release is set March 27. More details of the release dates coming up.

“AFTER THE FLOOD” – Micke Bjorklof & Blue Strip in New Orleans – A documentary film by Aaron Walker, check this out!!!

“After The Flood” – Micke Bjorklof & Blue Strip in New Orleans

(You find a version without Finnish subtitles on the video section)

“After The Flood” won the category of the best Finnish blues album 2013 at the annual voting on Bluesminister show at YLE Radio Suomi. In the annual critics poll of Blues News Magazine “After the flood” took the third place.

Hey, hey, hey!!!
Hot news from The Netherlands.
Micke & Lefty feat.Chef - Let The Fire Lead is THE ALBUM OF THE WEEK on 40up Radio, Muziek voor Volwassenen show hosted by Johan Derksen. One of the finest shows in the country. Thank you very much!!!
CRS/Continental Record Services

Micke, can I order a signed CD?