New album, titled “Ain´t Bad Yet” is produced by  John Porter, legendary for his productions of Buddy Guy, B.B King, Taj Mahal, Keb Mo, Santana and no less than 10 Grammy winning albums. The album was recorded at the legendary Rockfield Studios in UK. In 1975 it was the primary studios used by Queen for the recording of the greatest pop record of all times ‘Bohemian Rhapsody’.  Album cover is now launched.  Scandinavian release is set March 27. More details of the release dates coming up. 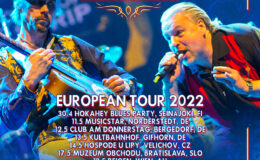 No.2 on Australian ABARAC charts. Right after legendary Buddy Guy, how cool is that!!!

We sure hope it’s gonna be a great one. We have a new studio album coming out later on the spring but we’ll get back to that when we have more details to share.
Happy New Year 2023! ... See MoreSee Less

All the best for you and hold on to the music😎